Seven years into the Modus journey, we’re excited to announce that the Modus Merewether Brewery Venue has officially opened!

The breathtaking space can house just under 300 people and visitors can enjoy delicious, brewery-fresh Modus beers poured from 36 frosty taps. The beers on offer will include the core Modus range, including their non-alcoholic NORT range, as well as limited local-only releases ranging from sours to lagers, hazy hoppy IPA’s to dark beers. The range will be insane and always changing! And if beer isn’t your thing, don’t worry – an extensive selection of curated cocktails, wines and spirits are also on offer. The menu is going to be as delicious and innovative as the drinks on offer; elevated pub fair with a sprinkle of fresh Mexican and fresh seafood, small and large share plates, an entire vegan section, innovative kids meals, takeaway lunch options, barista-made coffee, offerings from The General which will offer fresh bread, deli offerings, wines and more. There will also be a large selection of Modus and NORT takeaway options when it comes to beer and merchandise.

This multi-purpose venue has impressive function spaces (Barrel Room, Operandi Room & The Pavillion) for corporate and social functions and will include a huge kids area, slated for later in the year, which will also be available to be booked out for private kids functions. There will be brewery tours, masterclass events, limited edition beer release occasions and collaboration events with the local community (think surf film releases, live football screening, pints & picasso, men sheds, cocktail making etc), as well as night markets in the laneway to the side of the venue in 2022. The Modus Merewether site is now open and we can’t wait to welcome you!

Check out our local coverage on NBN 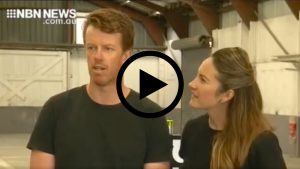